This year the oikos Central Eastern Europe (CEE) Meeting took place in Baku, Azerbaijan and therefore finally satisfied Anna’s wish to visit the place ever since she planned on going to the Baku Summer School the first time about five years ago. The topic of this years’ CEE meeting has been Leadership in Sustainable Urbanization. Being ignorant uninformed Europeans not really knowing much about countries located East to the Black Sea but not yet as far as the Middle East we couldn’t really relate this topic to Baku. So we figured we have to make our way over to see what this was all about. With basic travel guide knowledge (Melanie) and most adventurous jumping into the unknown (aka Anna most times too confused to get informed beforehand) we got to Baku a few days in advance in order to get acclimated, snoop around by exploring sites and local cuisine. 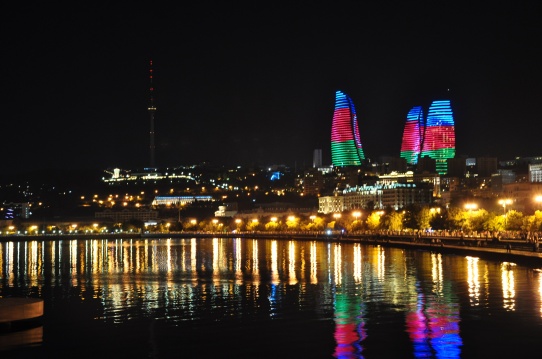 A few basics to our similarly clueless about this part of the world readers: Baku is the capital of Azerbaijan and according to our travel guidebook there are over 2 million people living in the capital. Also it is hosting almost a quarter of the total population of the country. While the majority of people are Azerbaijani there are also big groups of Lezgins and Armenians living in the country followed by Russians as the third biggest minority[2]. Due to the Soviet past the Russian language is almost as important as Azeri and often even used as a first language by the people. Azerbaijan is a Muslim country, though very liberal, which is also routed in their secular Soviet past but still seems to play a role in the conflict with the neighbouring orthodox Christian Armenia which has been simmering for the last decades. Of course, there are rather religiously conservative areas too still, with Ganja also being the second biggest city of the country, even a rather prominent one. As we failed to recognise that, we figured it was the capital of the somehow famous wine growing area, which apparently is true for the region in general but just not the city of Ganja itself. But who cares we had pretty good tea and dinner instead and there was great pomegranate wine waiting for us in Baku, which we didn’t know just then though.

From the 2000s onwards Baku has experienced a strong influx (annual growth rate 1,3% since 2000[3]) from the rural areas of Azerbaijan because of better employment opportunities leading to the city stretching out slowly but steadily across the city limits and towards other towns in the area. Due to only limited space in the centre and the integration of rural ways of living – single family housing, including car parking etc – into the urban landscape a lot more space was required to host people than it would have within a classic urban living style. 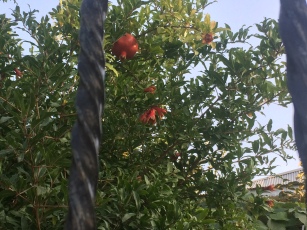 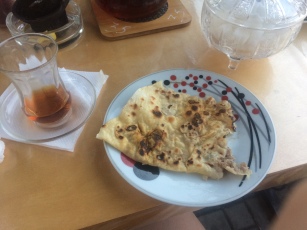 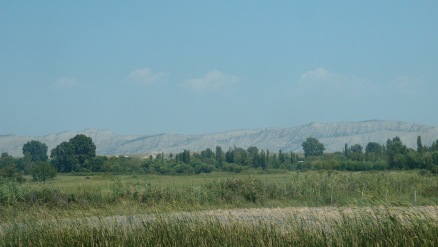 From the first moment, when we dragged shiny-tiles-hugging Melanie out of “one of the most glamorous airports ever” (yes quoting Melanie here) when getting to the city in the middle of the night we have been accommodated by the loveliest Baku oikees, who not only shared roof and most delicious food with us but also spared some time to show as around the city and help us figure out how to travel around.

Soon the realisation hit that the topic of leadership in sustainable urbanisation is actually a most fitting topic for Baku. Baku is a city which had the opportunity to completely reinvent itself after the collapse of the Soviet Union in the early 1990ies. As unlike other former Soviet countries the country had substantial funding from oil reserves to their disposal enabling the government to do pretty much whatever they liked to do. Which is what they did, even though there has not been much sustainable leadership involved there as we learned during the CEE meeting.

Baku decided to aim for the sky, literally. As role model for city development, they chose to equal Dubai of all cities and put a lot of money into building skyscrapers and other rather fancy extravagant star architecture (aka starchitecture) such as the Heydar Aliyev Center designed by Zaha Hadid. This was actually one of the first buildings we saw when entering the city and fed into our discussions on the human scale of these kinds of buildings and the influx of “art” into architecture as a main purpose of the building’s existence. As the lady of clouds (aka Mel) was starstruck with the artistic beauty of the building, he leprechaun (Anna) was rather disturbed on its sprawling shape supporting very much a car-dominated society rather than a more sustainable pedestrian-friendly landscape of short distances. Guessing it’s a matter of discussion but Anna couldn’t shake the memory of the WU LC in Vienna with its angular walls and stairs, longest distances to the next toilet and a sterility so out of touch with a student environment.

As we later learned during the CEE meeting Baku is basically divided city, only connected through a few main arteries of grand boulevards. While the East city (historic centre, sea front) is rather compact in layout the West part of the city – separated from the old part via the former industrial belt now obsolete – was mainly constructed in Soviet times according to Nikita Khrushchev’s idea of logical planning along three main corridors fostering industrial purposes. This approach varies much from today, where city planning does not appear so logic anymore. While it is still focused on motorisation it is feeding into a general mentality towards car ownership and therefore the need for street space while public transportation besides the metro appears to be rather poorly developed though with 0.20 AZN (0.10 EUR) per ride very cheap.

Transport, in general, is very cheap in Azerbaijan as we realised when branching out to Sheki and Ganja explorations and paying only about 3-4 Euros for 5-7 hour trips. Therefore make your way over there (we will too again asap) and check out the country as well, it is beautiful and very divers, comes with great food and the friendliest people. Although English is hardly spoken on the countryside it’s not really problematic as people are really trying to understand and help you. In a moment of distress, when we could not find the Tripadvisor top rated accommodation we reserved for the night where it was supposed to be a young woman took pity on us two stinking, unfashionably dressed Austrians and proposed to jump in her car in order to drop us at the area where she knew to be hotels in Sheki. Who would have thought that seven people plus a huge traveler backpack would fit in a small Combi, talking about efficient and sustainable use of vehicle space. And happy we did jump, as it brought us to a most lovely Karawanserei, we would have never thought of being able to stay otherwise. 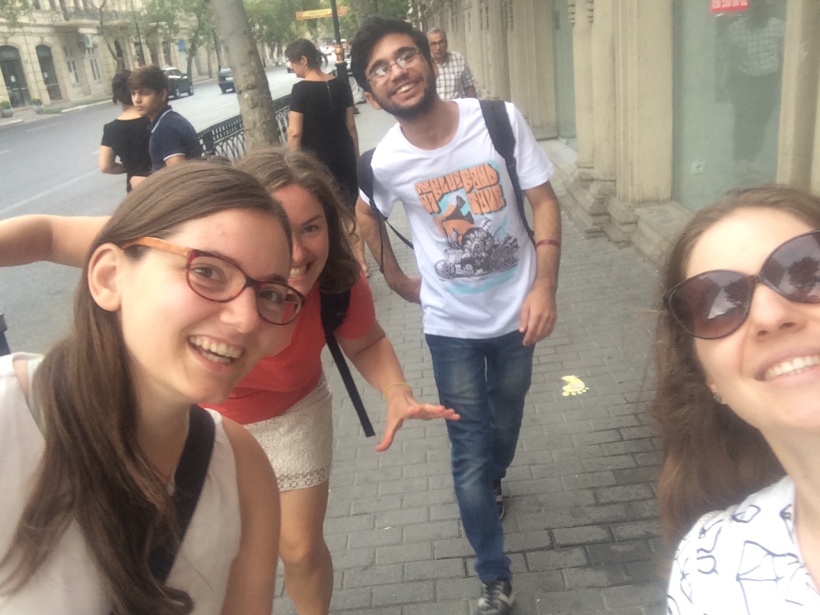 During the CEE meeting we learned that the excessive construction of the oil-fueled “Golden years” (early 2000’s) not only led to the creation of landmarks but also encouraged a general beautification of the city, especially in the historic centre where buildings have been renovated on the outside but left to whomever it may concern at the inside, go figure.

Since there has not been an all-encompassing master plan due to still very local executive power structures remaining from Soviet times this excessive construction going on lead to an architectural chaos with architectural landmarks seemingly being plopped down randomly around the city and boosting gentrification, social conflicts and environmental problems.

So how is going to be in the future as Baku obviously did not manage to go down the Dubai road successfully?

While money is running out, fancy towers (e.g. the Flame towers or Socar tower) are practically empty, conflicts are rising amongst the various social classes and urban sprawl to the surrounding areas of the capital city is further boosting soil compaction and car use in and outside the city. What are they going to do with the multiple sports stadiums? One of them has been actually three times more expensive as the Munich Allianz Arena and alternatively spent could have built housing for 150.000 people – just so you get an idea of what kind of money was involved and that was just one building. 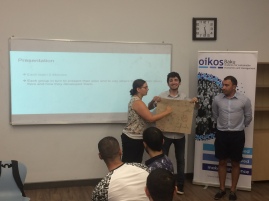 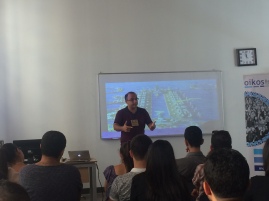 After getting a pretty nice overview on the history of the city and being introduced to first glimpses of sustainability projects in Baku containing grassroots projects of recycling and bike projects there was also the possibility for very hands on actions to share ideas of how to solve urban sprawl problems while bringing in the various cultural and social backgrounds of the participants. Finally the developing of a “dream neighbourhood” in very international groups gave a perspective on other people’s experiences and ideas of sustainability in public areas. As this started off with general reflection on how everyone was involved in their neighbourhood and its development this task could have been taken even further though by defining actions for the people in order to make that dream a reality in their respective neighbourhoods but we need something for a follow up, right?!

The whole meeting was energised by amazing homemade Azerbaijani vegetarian meals, lots of energizers and some cultural peeks such as a theatre play kicking off the whole event Thursday night. It was describing a man’s relationship to a dying earth and his various emotional stages of realisation, surprise, happiness, denial, mourning and what is in between while mainly using plastic waste as stage decor. And last but not least the grand finale of the CEE-Meeting was a visit to a paper recycling company where we received a very interesting tour on the process of how recycled paper comes to be. This was not only a cool because we got to see how the production itself works but also because we were now able to relate to the origin of the paper we have been  given at the very beginning and on which we have been writing on throughout the meeting.

All in all this year’s CEE meeting was a perfect example on how a motivated, well-matched team of individuals sharing a common set of values can build something great within only a limited time and scarce financial resources, while even taking into account seemingly small things such as making rather cool artsy nametags out of recycled material. What we loved in particular was their ambition not only to have lectures and fancy speakers involved in the event but also used the brainpower of students as speakers and hands on tasks for the participants as a valuable asset to create mutual awareness. 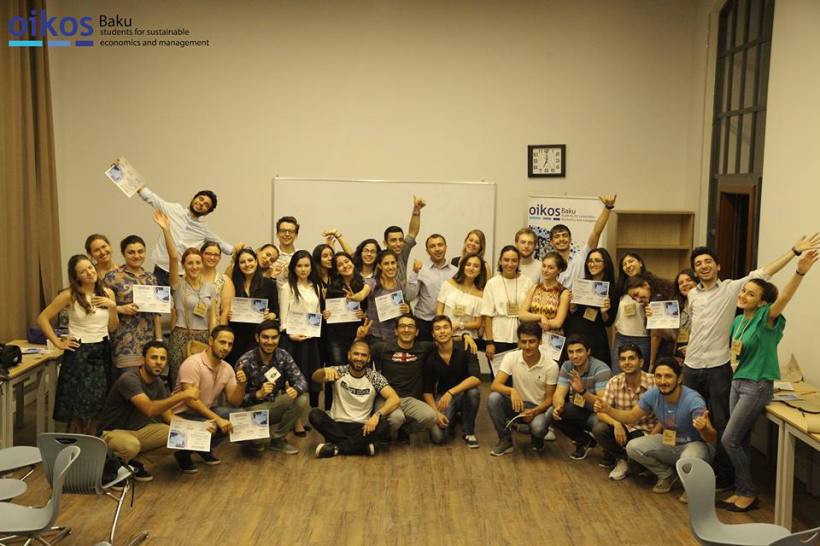 One of the most important general learnings we actually gained during a rather fun energizer – who said games are not important for our learning journey? The task here was one person tried to touch and through this freeze everyone in the room in place which leads to everybody standing still within one minute. In a second round, the goal remained the same but people still moving were able to reverse others solidification by also touching them, which leads to a constant movement as long as the game continued on. This is a very nice example on how even very little things such as actions in one’s personal environment can feed into the change of a whole bigger system and if necessary destabilise it. It showed nicely how just complying and telling oneself that he or she is too small to make change is really just a very easy excuse allowing us to remain passive. But in order to really make a difference we need everyone to learn to take their own lead in a very personal sense rather than always talking about a very narrow understanding of leadership in a management handbook definition which, who are we kidding, is not really fit for the 21st century anymore anyways.