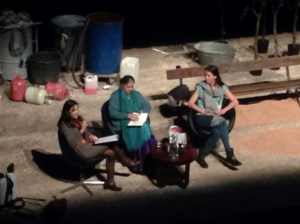 On October 23th, 2016 Vandana Shiva joined the Festival des Libertés (in collaboration with SOS Faim) in Bruxelles to talk about the deficits and challenges in food security.

Vandana Shiva was born in India in the 1950ties where she already learned from her parents, who left their jobs to become farmers, about the importance of the land. She finished her PhD in quantum physics in Canada and continued in inter-disciplinary research in science, technology and environmental policy when returning to India.

She took part in the Chipko movement in the 1970ies fighting together with other woman from rural areas in India for preserving biodiversity in their environment. In 1982 she founded the research foundation for science technology and ecology. Whilst being an advisor for the Food and Agriculture Organisation of the United Nations she is an activist for biodiversity and initiator of Navdanya an organisation founded in 1991 which focuses on preserving biodiversity through various endeavours such as building a data base of seeds of endangered plants [1].

All, but a small village of indomitable Gauls…

In her presentation during the Festival des Libertés Vandana Shiva immediately got the attention of the audience when she stated how our freedom, our governments, our decision making and our democracy are being hijacked by a few multinationals. The conference took place on a Sunday after the Wallonia Government in Belgium refused to sign CETA which for me personally (and apparently for Vandana Shiva) was a moment of happiness and respect in their David and Goliath situation. Especially when learning about the power of lobbyists in European policy making and the lacking transparency in the process as well as uneven distribution of influence of corporate (around 80%) and societal organisations was very much alarming to me[2]. Well, Wallonia did agree in the week after and by now the treaty has been signed. Unfortunately, but nonetheless this situation with CETA and the actual power of a rather small player (if acting on it) was rather well demonstrated. 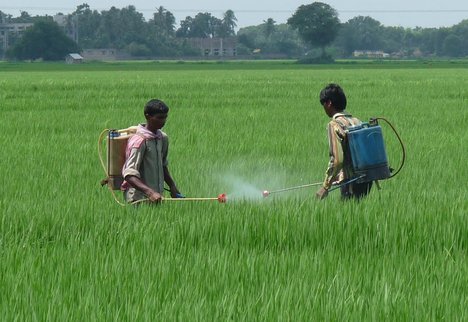 Vandana Shiva continued by explaining how her interest in the topic of food security was very much influenced by a few incidents in India in the 1970ies such as an accident in a chemicals factory in Bhopal, where the leaking gas killed a few thousand people, left many more injured and even affected unborn babies. She also connected the officially declared as religiously motivated tensions between Sikh and Hindus in Punjab (one of the richest and agriculturally important regions in India), leading to the Sikh pogroms in 1984 to the “Green Revolution” introduced in India in the 1960ies.

The Green Revolution was an effort against low yielding agriculture productivity in order to strengthen India’s food security by introducing industrial farming with GMO wheat seeds to regions with high levels of agriculture such as Punjab. Whilst the harvests increased due to these changes of seeds, they were also accompanied by an intense use of chemical fertilisers and pesticides as well as a necessity for heavy irrigation. This led not only to a fast pollution of the land, sinking groundwater levels and deterioration of soil fertility but also to a strong dependence on foreign GMO seed providers and therefore increasing debt of Indian farmers. In the long run, these developments played a major role in the high rate of foreign ownership of Indian agricultural land. Vandana Shiva explained how farmers are no longer living in freedom since they are no longer able to decide upon what crops they want to grow and what prices they want to sell them for. These measures, heavily funded by the Indian government were also strongly supported by the World Bank and the Rockefeller Foundation, she said.

Seeds, literally at the roots of things

According to Vandana Shiva these changes are not just Indian problems but a rather wide spreading problem of homelessness inflicted by this certain kind of farming, forcing farmers to give up their land in order to pay back for GMO seeds, fertilisers, pesticides and irrigation systems to multinational companies like Monsanto. She explained how chemicals able to kill (pesticides) once developed for war were considered brilliant for this specific use at the time. Due to their ability to kill not just by taking lives directly but also through creating massive wasteland of former farming grounds no longer capable of growing food they can definitely not be considered brilliant in the context of containing life for humanity.

In the CETA context Vandana Shiva also explained how free trade agreements often prevent national governments to help out within their own country since these measures might be considered a breach of “free” market trade. In the case of India this led to a mass-migration of people to the city and lots of people dying when the government was not allowed to react during massive droughts in India or start regulating the use of chemicals making Panjan the region in India with so many cancer cases there is even a whole transportation system “cancer trains” to cope with the amount of patients from the region.

In a worldwide context she contrasts how to the conflict in Syria or the Boko Haram terror in Nigeria are described as major problems of our time while nobody addresses the long term threats of lakes drying up due to water intense industrial farming with GMO seeds, Indian farmers (also children) committing suicide out of despair of being deprived of their land as the only source of income, Japanese workers jumping into death due to hard and stressful working conditions and an increasing drug addiction amongst U.S. middleclass[3].

She explains how piracy is still a major issue today, it just changed its face. Rather than stories of ships hijacking merchants today the magnitude is far greater when considering land grab and patenting seeds and animals by a few players can be compared by a hyper colonialization where in history ownership to land was claimed by the person/nation mapping the land.

While these things sound very horrible and of course deep down we know we are also affected in a long-term scenario even if we don’t “feel” that right now, it is hard to take away something for one personally other than the sole benefit of information but there is a lot of possibilities.

What do we lose if we stop eating poisonous food?

50% of global warming can be traced back to industrial farming – including food waste, packaging, transport, chemicals production for agriculture, deforestation, fuel etc. Therefore, a valuable first step would be being a thoughtful consumer. 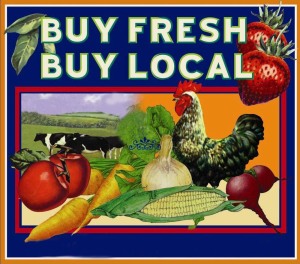 Avoid buying industrial meat, meaning from supermarkets but rather check out local farmers’ markets in your city instead. Sure, the prices are far different, so buy less. Eating less but more qualitative foods is not just beneficial for the gourmet in you but also our ecosystem. Check out was is seasonal in fruits and vegetables instead of buying pretty but flavourless strawberries in January. This may also hold a major health benefit since the nutrients in seasonal foods are also very relevant for your body and custom-built to its needs at the various times of the year. By supporting local farmers, you can also influence the way how food quality is measured in Europe (and other regions of the world) by saying “No” to the scale of size and colour while rather favouring benchmarks of taste and pesticide contamination.

Also, it is mostly small farmers who produce food for the people while keeping diversity, conserving soils and earning crop outcome rates 10 times higher than in industrial farming, which in contrast is mostly used for fuel production and mass-cattle farming anyways.

Taking out the money can therefore take out much of the problem as well.

Supporting local farmers not only helps to build food sovereignty which also builds community and makes us able to reshape democracy through food and our consumption habits. Demanding a freedom of markets (often misused by big multinationals to define “free” trade) via a removal of subsidies for industrial agriculture and therefore set it on equal terms with organic farming. This would level the problem as well, since industrial farming is not profitable without these funds and would therefore vanish from the market.

The role of citizens is currently much reduced to voting every few years but it could be much more. 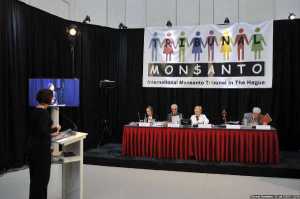 In France local farmers started a movement for sustainable farming, which in the process was joined by a lot of other smaller and bigger movements and organisations taking Monsanto to court (Monsanto tribunal) which is currently ongoing in The Hague.

Samuel Huntington stated that people only know who they are once they know who they hate in his book “The clash of civilisations”. This describes quiet well our status quo and the current political developments in the world.

Post-globalisation created consumerism and illiteracy about how others live, leaving us more clueless about other cultures than ever before when we, so Vandana Shiva, still perused internationalism. Multinational companies mostly produce abroad in places with weak labour and environmental laws not caring about locals and their environment while making national workers become obsolete and who’s unhappiness feeds into the hate spread by Donald Trump, Marie le Penn, and so many other populist politicians all around the world. To change this, we therefore need to change our values, away from defining ourselves by hate and greed towards others in exchange for defining ourselves according to the people we love.

This does not only concern our way of consumption but requires a general change of approach  (consumption, education, work…). Diversity is not just in food but in our common (critical) thinking and can be very much defined by following our conscience by doing the right thing and through this way driving change by rediscovering our potential of instinct for value rather than price.