Micro-finance is said to be the solution to poverty in developing countries. Grameen Bank is not the biggest institution from this growing sector, but it is probably the most iconic one. Through Grameen Trust, the model has been exported from Bangladesh to 40 other countries and, as you all know, Muhammad Yunus was awarded the Nobel Peace Prize Award on 2006 for his success in fighting poverty through this model.

Since I left my job in October 2014 and moved to Vienna to finish my Master on CSR, this has been a great year full of experiments and experiences. This last shot was a way to end this year at its highest point. And after almost nine weeks in Asia, it definitely was.

The Grameen Visitor Program was the second half of my Asia trip after having spent five weeks in India. I started this second and last part with a dose of that smart European skepticism that is more related to ignorance, fear and egocentrism than to a really critical point of view.

Somehow, it is normal: can you analyse the world from another pair of lenses than the ones you were given by the culture you were raised up with?

There are things that you have to see and breathe by yourself. Never mind how much you read about it, you will never get to understand it properly. Culture is one such thing, even worse: after you become an adult I do not think there is a way to understand such a different culture as the Bangladeshi one with only some days, months or even years.

For me, seeing it by myself, I realized I would never understand certain things at all. Later I understood I did not have to. All one has to do is respect it (I am obviously not talking about human rights violations).

You might be wondering what these things were. Well, it is nothing you cannot find in any book or website about Bangladesh or about countries nearby, but once again, if you read it you can understand it from a rational point of view, but you do not know how it feels, how you will react to it. For example, it is the difference of coming from individualistic cultures and stepping into collective ones. About never saying “no” or using negative expressions (I would have never imagined how nervous that made me). About another type of trust, of help, about a very different type of time management, about having other preferences in life, different values, etc.

These are the clues that led me to have an overview and a better – though not deep – understanding of Grameen Bank and Micro Credits. Grameen means village. As the name indicates, the Bank only has governmental permission to operate in rural areas. Although we mostly hear about Grameen, there are many other organisations offering micro-credits in Bangladesh; like BRAC, ASA, DSK, etc. 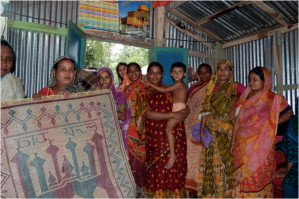 The four-week program allowed us to spend a week in a village in Chittagong area, in the south of the country, where Grameen’s activities started. It is there that we understood how theory met practice.

One of Grameen’s main characteristics is that its borrowers are only women. Only a remaining 3% from its early years corresponds to male borrowing. The surprising fact for us was that many women did not use this money for their own businesses, but for those of their husbands. Despite our initial shock, we were told that was a way in which women would start arguing to their husbands about money issues, holding them accountable for the return of the loan. It sets the couple in a dialogue position, very slowly changing the role of women in Bangladeshi society. If they are successful and the women have an entrepreneurial spirit, some of them start their own businesses.

Somehow this information got lost on the way between Asia and Europe. Most of us (the group of interns) thought that women were the only entrepreneurs and, at first, we felt this was somehow a failure because women empowerment is not as far as we thought. But what do we know about the real situation of women in Bangladesh? Of how much it has improved in the last years? How much is due to Grameen’s efforts and how much to simple evolution, that is difficult to prove.

Another fact that shocked us is that, supposedly, repayment rates are reported to be higher than 95%, with some offices getting to the 100%. I know, we also thought this was not possible, but it is necessary to understand that from a cultural point of view, it is a disgrace if the repayment of a loan cannot be made (like a curse). Apart from that, there is a compulsory insurance for each loan, there is a flexible loan if a member finds herself in difficulties, a beggar member loan – that does not expect repayment – and culturally, these people help each other if they cannot repay. What I mean is that before it counts into a non-repayment percentage, there are many options available, especially counting on the last one, because it is a culture and a context in which neighbours can rely on each other. Unfortunately, this is something difficult for us to understand in the western world.

One of the main critiques of the bank is that it keeps its borrowers for decades. Once there, we met women who had been borrowers for over two or three decades. They claimed they would not be able to afford their children’s education or to make their businesses grow if they did not take a loan. This is a hot topic of discussion: are they still poor? Where is the boundary? Does this have to be defined?

Listening to their stories and comparing areas, it is clear that, in average, some improvement is achieved through micro-finance. But the thrilling part would be to know which social indicators are used and how. This remains open because, surprisingly, Grameen Bank uses no social indicators at the moment.

Some years ago, there were 10 poverty indicators and the 16 decisions that were implemented for all members of each center. These included such indicators as having clean water, sending the kids to school, having a maximum of two kids, etc. Although it is very difficult for us to understand how much the situation in these villages has changed over the last 30 years, most of these indicators are obsolete – they are over them – therefore, the question remains open: where is the threshold and how is poverty measured now? Which are the correct indicators to be used? Which are the outcomes that are to be expected?

Since professor Yunus left the bank in 2011, the institution has been undergoing some type of empty-chair and leadership crisis.

This is a very important point in history for Grameen Bank and, probably, for the micro-credit sector as well. The decisions they make in these coming months will decide the future of the bank and that of thousands of borrowers in rural Bangladesh.

There are many critiques falling on to Micro Credits and questioning its impact. For what I saw, it does – on average – achieve to take people out of poverty. The question is if it produces and increases development as well. What is development? How do you measure it? Is development only what we understand in western countries? Do they have to have the same type of “development”? Why? Maybe the western way is not the proper one: growth increases, happiness indexes decrease…

To me, the biggest “enemy” micro-credits have is the propaganda that is being made about being THE solution to poverty.

After what I learned and saw on the field, it is only one of the solutions, which combined with others – through collaboration with other institutions – might achieve a great effect and make this world a better place.

When I took this view away from me – THE ONE solution – I started being able to understand the opportunities micro-finance actually provides to many families. My opinion.