Day 2 was our first day at LSE (the London School of Economics) and all about lectures, workshops & learning circles to get into the topic of sustainable finance.

8 am. The day starts with a delicious breakfast including fresh fruits, cereals, toast and of course baked beans and sausages.

8.45 am. We are leaving to LSE (London School of Economics) to hear lectures about the impacts climate change will have on our way of living, how the financial system functions and how far it respects environmental issues.

Amongst all the different explanations, approaches and case studies we hear, we learn once again that the initial aim of money is just a common ground (currency) for exchanging goods and services and that we should reconsider the whole system that is based on making debts. If we would follow the current track we´re on now, we will directly drive into the next crisis. According to Bernard Lietaer who will also attend the Summer School about alternative economic and monetary systems at BOKU in Vienna there has been a lot of crises (banking, monetary, sovereign debt) since the last 300 years since when our current financial system was established but until now we´ve not been able to learn from our mistakes. He says it´s like a disease that comes up again and again in different places at different times (in average in more than 10 countries per year) but that it is all coming from the same origin. So if we won´t be able to get down to the root of the trouble we will just delay it and wait for the next crisis.

So how can we do it?

If you think that it´s all about the governments that need to introduce policies and economists that have to find new economic models, you´re wrong. There are a bunch of new approaches coming up and a lot of them are grassroots innovations from people like you and me who are unhappy with the current situation and who are looking for new ways. Take for example the Chiemgauer in Bavaria or the Waldviertler, more close, in the North of Austria; these are complementary currencies invented by local people that are not based on making debts. In difference to the Euro, it doesn´t gain value after time if you save it on the bank. You don´t get interest on it (it even looses a certain percentage of its value after some time so that you have to buy stamps after some months to keep up the price) resulting in keeping the money circulating and therefore economy alive. In Bavaria, over 600 businesses are already involved that accept the Chiemgauer but all of them are local ones so that you have another advantage at the same time: you just invest in regional development, in businesses that are real and better reachable for the little people where they maybe know the owners and where their goods are coming from. Besides attaining a better quality (for example if you got a bad product from the local butcher it would destroy his business if people hear about it), another side effect is the social component that comes along and let people get in touch with their neighbours and other community members.

So this example shows; there are already approaches, solutions available. We just need to think, stand up and do something!

12.15 pm. We have lunch outside the university, it´s sunny, oh lucky we are! The food is provided by FoodforAll – a not-for-profit organisation serving poor (and students :P) for almost no money and it´s deliciouuuuuus! 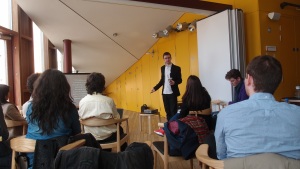 In Great Britain there has been a survey among members of the National Parliament where they were asked about how money is created. Quite shockingly, only 1 out of 10 members knew the right response. So, what do you think? The government? Banks? Somebody else?

5 pm. In learning circles we discuss different projects oikos International and the the chapters are working on now and which ones they like to establish in the future.

6.30 pm. After some fruitful discussions, we´re heading to the restaurant My Old Dutch to have some proper pancakes for dinner.

And last but not least, we can´t miss to grab some beers at LSE´s pub to wrap up our 2nd day – cheers! 😉